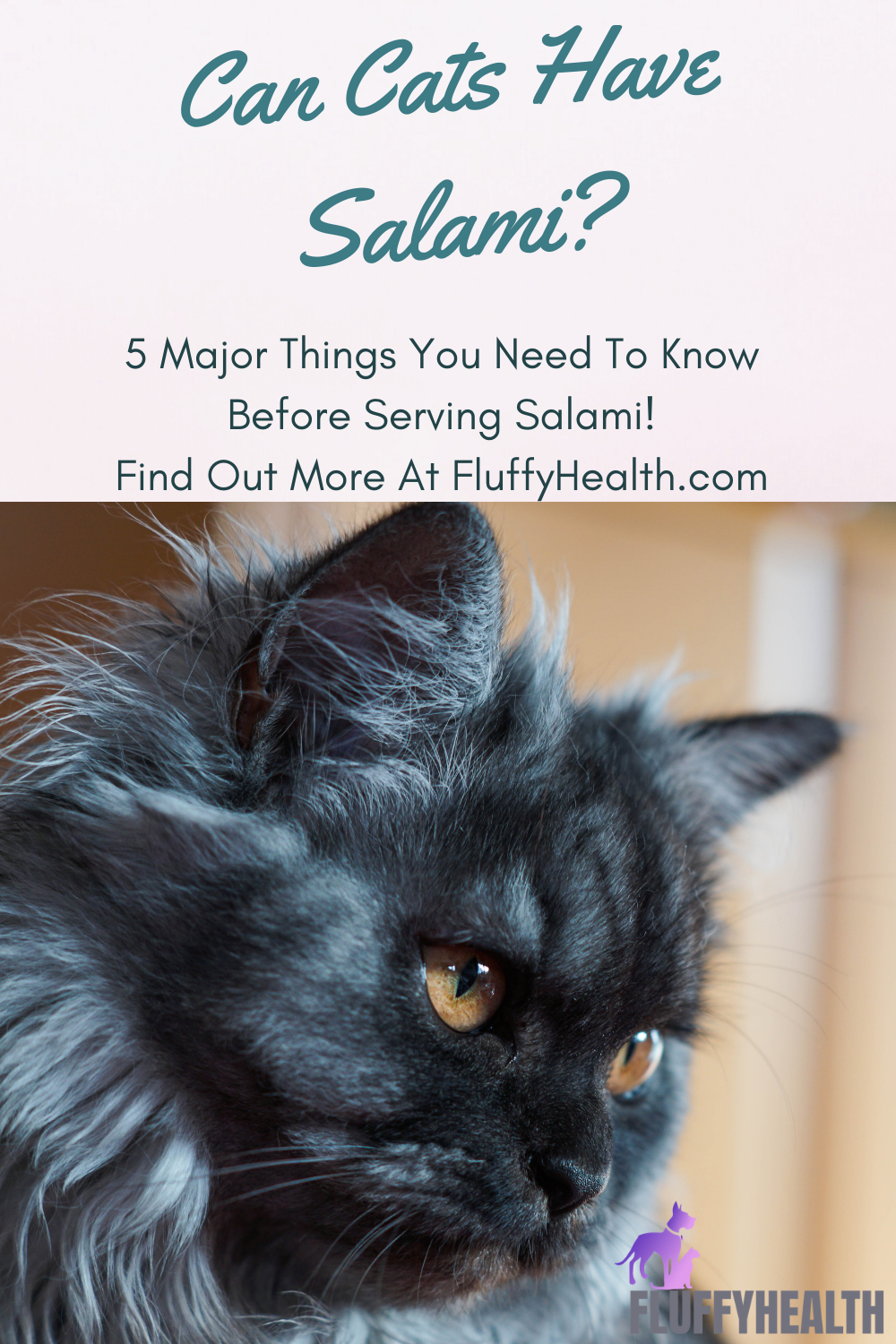 Can cats have salami? One of the questions frequently asked when pet parents are trying to introduce new food to their feline friends. But can it be incorporated into their meals? Can cats have salami? The fearsome of human foods allowed for cats is the only thing that ruins the snacking-time between pet parents and their cats. Instead of being a human-pet communication zone, snacking-time often turns into a questioning-throwing space.

In today’s article, we will answer the question: Can cats have salami by starting by knowing more about salami!

Salami (also known as salame) is a processed sausage made of air-dried and fermented pork. Pork can be used rarely in Arab countries due to the religious guidelines forbidding pork eating. In that case, they use salami that is made from beef, which is called halal salami.

Salami has been around for a while, and its origin is believed to be from Italy. The phrase “salami” means salt in Italy, and while most people call it “Italian sausage,” salami is a comprehensive name that can be referred to any type of encased meat.

Also, different types of salami are present because the meat can be taken from different parts of the pig. The most common types are

What Is Salami Made Of?

Hmm, my question was, “can cats have salami?” how does this relate to it? – you need to patient. It’s all connected! After all, knowing what salami is made of and how it can give you a good knowledge about the ingredients used in it provides you with useful information if these ingredients are safe for cats.

Besides pork meat, the main ingredients are salt, garlic, white pepper, minced fat, vinegar, and wine. Raw salami isn’t considered eatable. That doesn’t mean it needs to be cooked, but it should be cured.

Usually, the manufacturing process of salami goes through three main stages, preparation of essential elements (mixing the pork with all the other spices), fermentation (to get its unique flavor, salami is encased and stored in 20 to 45° CC environment for a month or two), then drying.

Can Cats Have Salami? The Answer!

Can cats have salami? Is salami good for cats? are two different questions. To have a clear conclusion, you must be knowledgeable about the difference between raw and cured meat.

According to The National Center for Home Food Preservation, curing meat implies that a salt-based mixture (besides other ingredients sugar and nitrates) has been used to preserve the meat itself and its color and flavor.

Meat like beef and fish give high nutritional value to cats, but cured meat, like sausage and salami, lacks the whole value provided by meat. That’s why they are favored as a snack rather than a main meal.

Therefore the answer to this question is No and that to avoid unnecessary health issues. However, you can still give your cat salami as a treat as we are going to explain next.

Can Cats Have Salami In Some Occasions?

Can cats have salami? The short answer to this question is No! as we answered it before. However, when served in small amounts, salami can be a safe snack to share with your kitty, which shouldn’t come as shocking news due to its carnivore nature.

Nevertheless, as a cat parent, you need to be aware that salami doesn’t add any health value to your feline friend. Because unlike raw meats such as fish and beef (which are rich with antioxidant content), salami is cured, meaning that most of its nutritional value has been stripped from it during the process.

5 Cases In Which Salami Is Dangerous To Cats

Maybe “adding zero nutritional value” isn’t a straightforward “NO!” answer to “can cats have salami,” but these 5 conditions can be the NO you are looking for.

The rich-sodium content in salami makes it a NO-NO choice for a healthy feline diet, especially when overeaten. The effects of high levels of sodium in cats mostly affect the cardiovascular and renal systems.

One slice (around 12.3 gram) of pork salami contains up to 214 mg of sodium. A consumption rate of only 30 mg of sodium a day can be harmful to your kitty!

• When Served To Kittens

The small percentage of bacteria and toxins present in salami can be well-managed by cats’ well-evolved immunity system. Unfortunately, kittens lack such a defensive advantage, which puts them at a more considerable risk of being sick.

• When Eaten By A Pregnant Cat

Serving salami to your pregnant cat can also lead to blood poisoning, septicemia, and endotoxemia, which might be fatal in severe cases.

Salami could contain some ingredients that might cause to the cat’s body. For example, chili and mustard seeds can be the leading causes of cats’ intestinal issues, such as vomiting, bloating, and stomach pain. Intestinal problems could be the most insignificant of your worries compared to the toxicity of disulfides and thiosulphates existing in garlic.

Garlic is one of the main ingredients in salami, and when found in the right amount, garlic could cause severe problems in cats like hemolytic anemia.

Symptoms related to garlic toxicity vary and could range from minor intestinal changes such as vomiting, diarrhea, loss of appetite, nausea, and drooling, to more severe symptoms such as tachypnea and tachycardia.

If your cat is suffering from another condition and your vet prescribed a special diet, adding salami would worsen. An example of that is cats with hypertension, and salami is rich in salt and saturated fat.

Although it’s not the best recipe to serve your feline friend during snack time, salami can be given only after getting approval from your veterinarian (since it’s a human-food).

After that, you can give your fluffy friend a tiny slice of salami to check the mood. If you were getting an OK, then you might proceed with another small piece.

My Thought On The Question, Can Cats Have Salami?

So, to state it clearly, you can molly-coddle your kitty from time to time by putting a new taste in your cat’s mouth as a change from the usual salmon and tuna daily mixture. Still, your cat shouldn’t get used to it as it adds zero health value in the best cases, don’t let your cat decisive eyes persuade you, cats often use it as a way to serve personal purposes, and it’s a well-mastered game by those fluffy beings.

If you have more information or a different answer to the question, can cats have salami, please write them down below in the comment section. So, every cat owner benefits from that.